Shelter and Rescue Reform and Standardization
Ban gas chambers for euthanasia
Standardized reporting of numbers to public
Database of abusers, hoarders and animal thefts
Posting of euthanasia rates on front doors
Better quarantine procedure to reduce infection
Spay / Neuter before adopting out
Breed Specific definitions updated
Keep euthanized animals from being rendered into food
Intake pictures of all animals
Post all available animals for adoption online
Problem:
Cities and Counties vary too much in how Companion Animals are:Intended Goal: There needs to be reform and standardization across the State of Indiana, as well as adequate oversight.  Prevention resources and training could greatly reduce current problems in many areas.
http://www.nwitimes.com/news/local/porter/vet-porter-county-animal-shelter-no-longer-humane/article_6ebfc16a-ace8-588c-af09-a20bd9704ad4.html
http://www.chicagotribune.com/suburbs/post-tribune/news/ct-ptb-porter-animal-st-0913-20150911-story.html

ANIMAL SHELTER STANDARDS AND IMMUNITIES ACT
https://capa4maryland.wordpress.com/2014/12/21/official-release/
Humane Society - HSUS sponsors Humane Lobby days at the state capitals. You can go there, talk to legislators, tell them what you want...check back at this website (http://www.humanesociety.org/.../humane-lobby-days.html) to see if they add an Indiana day.
Approximately 7.6 million animals enter shelters each year nationwide, but only 2.7 million are adopted.  That means 4.9 million are killed each year.  Are you okay with this? We want change. You can help.
"According to the ASPCA, there are 13,600 animal shelters nationwide that have the task of dealing with millions of animals. Each year, as many as 7.6 million animals are expected to enter shelters. That’s about 3.9 million dogs and 3.4 million cats. Of these, a staggering 2.7 million—1.2 million dogs and 1.4 million cats—are euthanized.
While about 2.7 million animals are adopted each year from shelters, only about 649,000 of the lost pets are eventually returned to their original owners. When it comes to dogs, about 35% are eventually adopted, while 31% are euthanized, and for cats, 37% are adopted and 41% euthanized." ~ David F. Kramer for PetMD

Problem:  The use of gas chambers to euthanize pets is inhumane.
Intended Goal:  Ban use of gas chambers for euthanasia of animals.
“We’re disappointed to let you know that the Utah Senate recently failed to pass SB 197 to ban gas chambers which are used in the state when its shelters tragically kill unwanted animal companions. The bill would have changed the rules for animal shelters and would have outlawed the inhumane and atrocious use of gas chambers statewide. Unfortunately, it did not pass the Senate; it was sent to committee for “study” for one year and later filed with bills not passed.
Gas chambers are an excruciating and terrifying way for an animal to die. Dogs and cats are placed in the box-like chamber and are terrified and conscious as their bodies succumb to the gas. They choke and vomit and claw frantically at the walls as they try in vain to escape. Sometimes, it takes more than one attempt to kill each animal, and there have even been cases of animals being frozen or buried alive after surviving the ordeal. Death by gas chamber is so inhumane, that the vast majority of states have outlawed their use. That’s why it’s so disappointing that the Utah Senate failed to pass SB 197. Utah lawmakers had a chance to end this cruel and unnecessary practice, right here and now, but instead, disregarded the suffering of animal companions in Utah. Now they will continue to suffer the agony of death by gas chamber when they should be in loving homes instead.” By Group In Defense of Animals

Standardized Reporting of Numbers to Public

Problem:  There is inadequate transparency of Shelter/Rescue Reports.  In some cases shelter services are granted to private service providers that do not meet the community’s standard of care.  With a State Law, those standards would be uniform and enforceable.  Abuses for overcharging, high kill rates, improper disposal of animals, poor sanitary conditions, Schedule B Sales and the ability of the community to examine financial records and completely tour all facilities needs to change.
Intended Goal:  Improve the overall quality of care for Companion Animals in Indiana and reduce the number of abusive practices and financial improprieties.  Law requiring Totals for Adoption, RTO (Return To Owner), Euthanasia, Transport, Rescue on doors entering building.
Track Shelter Data: http://www.aspcapro.org/webinar/2015-12-17/shelter-animals-count

Problem:  Although animal thefts, abusers and hoarders are often reported at a local level, they are not addressed or tracked well.  These perpetrators often continue on to other areas unnoticed and unprosecuted.
Intended Goal:  Citizen complaint registry at the State level would show the trend and hopefully lead to curbing these problems.

Problem:  Owners are given the false impression the pet they are surrendering will be adopted out instead of killed.  There need to be uniform consent forms and procedures.
Intended Goal:  Post a clear sign in front of all Shelters, Rescues and facilities that euthanize animals before they enter.  They must also read and sign a release form with the knowledge their pet, especially a senior pet, is usually not put up for adoption and is killed within 48 hours of entering the Shelter.  There needs to be a standardized form and a pamphlet given to them.
People don't read forms.  There is a big shelter in IL, Euthanasia numbers just released.      Everyone thinks it's no kill, more like 80% kill or Adoption, RTO (Return To Owner), Euthanasia, Transport, Rescue on doors entering building. 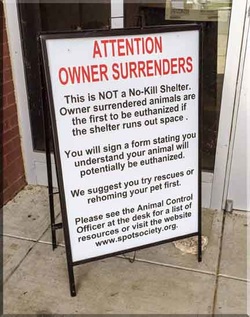 Problem:  Parvo, Distemper and CIV are easily transferred in Shelters and Rescues due to close proximity.  If not properly tested and quarantined, they spread and this goes out into the surrounding pet community.
Intended Goal:  Testing for Parvo and Heartworm for all animals entering Shelters and Rescues to reduce spread of disease.  With a State Database of animals, this could be one of the data fields to denote who tested, date tested and result of the test. 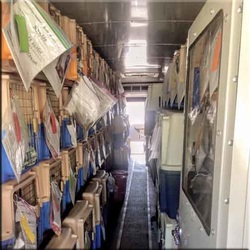 Spay / Neuter Before Adopting Out

Problem:  Overcrowding of animals in Shelters, Rescues and the community as a whole.
Intended Goal:  Require Shelters and Rescues to Spay/Neuter before adopting out.  Prevention ends up as a cost savings in terms of Shelter costs.  (Please see this in the Spay/Neuter area)

Problem:  Some communities define certain breeds as dangerous and others do not.  This sends a mixed message to the public on which dogs they can legally own and poses issues when one of these dogs crosses over into a jurisdiction with a different law.  For example, in South Bend, Indiana a Pit Bull is not designated as a “dangerous breed”, but it is in St. Joseph County and the City of Mishawaka, Indiana.  The dog crosses the street or is offered for adoption at a pet store in a restricted city, it causes legal issues.
Intended Goal:  Breed specific / dangerous dog definitions updated/changed to be statewide.
http://www.wndu.com/home/headlines/Michigan-Senate-OKs-bill-banning-local-dog-breed-rules-331428132.html

Keep Euthanized Animals from Being Rendered into Food

Problem:  Many animals are rendered into dog food and now euthanasia drugs are showing up in dog food and making dogs sick.
Intended Goal:  Standardize and monitor disposition of animal bodies.  Dog food labels need to disclose to owners they are feeding their dogs other dogs that were sick and euthanized with drugs that are now possibly in the food they are feeding their dogs.  Outlaw animal body rendering by Shelters, Rescues, Vets and others of the animals they euthanize.
Mass Dog Grave in Indiana
http://wgntv.com/2014/12/16/dogs-found-sick-and-filthy-mass-grave-also-discovered-at-indiana-rescue-farm/

Problem:  People aren’t always aware of all the dogs available for adoption at a Shelter that could be saved.  Often times they look on PetFinder.com but not every Shelter takes the time to post the animals there and just kills them.  There needs to be a standardize place to put the “available for adoption” that the Rescues, Transport organizations and public can look so the euthanasia rates decline.
Intended Goal:  Indiana State Public database and posting that includes pictures of the animals. Shelter intake documented with two pictures, face and body with weight and other data into State Database along with status on heartworm, parvo and other conditions.  Spay/Neuter status along with if there is an unregistered chip found in the animal.  Requiring Shelters to post dogs for rescue and/or transport before euthanasia will reduce the rates.
Other areas looking for animals to adopt out - Transport works -
http://www.npr.org/2015/01/01/374257591/with-rescue-dogs-in-demand-more-shelters-look-far-afield-for-fido

Nathan Winograd September 19, 2015 on Traditional American Shelter Conditions
In traditional American shelters:
- Animals are killed even when there are large numbers of empty cages;
- Animals are killed rather than given to rescue groups which want to find the animals homes or care for them in a sanctuary;
- Motherless puppies and kittens are killed rather than sent into foster care to be bottle-fed;
- In the vast majority of states, animals surrendered by their families can be killed immediately upon entering shelters without ever being offered for adoption;
- The shelter maintains operating hours that make it difficult for working people to reclaim or adopt animals;
- Field officers impound (then kill) animals rather than return them home, even when they are wearing identification;
- Animals are killed for “kennel stress” while volunteers who can socialize animals and keep them psychologically and physically healthy are not allowed to do so;
- Community cats who are not social with people are killed rather than released back to their habitats;
- People are told to surrender their animals (and those animals are then killed) rather than being offered assistance overcoming the medical, behavioral, and other challenges that they may be facing while living with animal companions;
- Animals are allowed to get sick through dirty facilities, sloppy cleaning, and poor handling protocols and then killed rather than provided preventative and rehabilitative medical care;
- Traumatized animals are killed rather than being rehabilitated through socialization and training.
In Florida, a proposed new law would make it illegal for shelters to kill animals if there are empty cages or kennels, if animals can share a cage or kennel with another animal, if a foster home is available, if a rescue group is willing to take the animal, if an animal can be transferred to another shelter, if the animal can be sterilized and released, and more: http://goo.gl/TrHan7
Similar laws in other states save nearly 50,000 animals a year, have reduced killing statewide by 78%, and have led to save rates of 94% and higher. We need to get that law passed and we need to pass similar laws in every state in the country. Learn more: http://goo.gl/1LeYoW
-------------------------------------------------------------------------------------
Michigan has 24 municipalities which save at least 90% of dogs and cats. 18 of the 24 save at least 95% and 10 save at least 98%.
Chippewa County, for example, saved 98% of dogs and 98% of cats in 2014 and adopted out the one pig who ended up at the shelter. Midland County saved 99% of dogs and 98% of cats. Alger County saved 100% of dogs and 99% of cats. The Upper Peninsula Animal Welfare Shelter (UPAWS) which serves Marquette is one of the shelters highlighted in our documentary film, Redemption, about the No Kill revolution in America: http://goo.gl/LzCZS6 It saved 100% of rabbits, 100% of guinea pigs, 98% of dogs, 98% of cats, and 94% of "pocket pets."
More info, including save rates for rabbits and other animals:saving90.org/michigan.html