Require S/N Before Adopting Out

Problem:  There is overpopulation of animals causing too many to be euthanized and overcrowding shelters.  These problems need to be solved with prevention, not euthanasia.
Intended Goal:  Require Shelters and Rescues to Spay/Neuter before adopting out.  The prevention methods are a cost savings over shelter costs and overpopulation issues.
Indiana House Bill 1175 / 2101
https://www.facebook.com/groups/WeAreTheirVoice.NWI/permalink/463049893842749/
Bill 1175 This bill would require all shelters to spay/neuter animals before adoption, and would include funds to do so.
This would make a huge difference. IL passed this several years ago and it is working. The law should say also say that all pets adopted from shelters and rescues (and TNR'd feral cats) need to be micro chipped too (IL also has this provision and many animals are reunited with their owners or returned to the rescue they came from instead of being killed in animal shelters or ending up in open door shelters.)  *TNR is Trap, Neuter, Return
https://www.facebook.com/OhioVotersForCompanionAnimals/photos/a.476508695746298.103094.476497349080766/824848627578968/?type=1&fref=nf 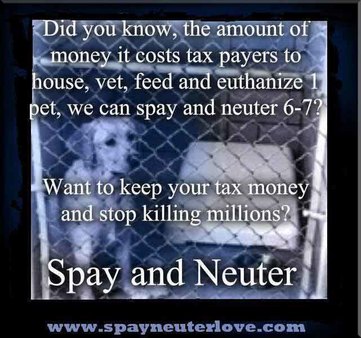 Problem:  People do not have the funds to spay and neuter their animals in a timely manner.  They know it is the right thing to do, but because of income restraints put other family needs first. Animals that are unfixed also tend to escape and create other problems.  Low cost housing areas often end up with feral cat colonies and abandoned puppies.  Extra animals are often dropped off in rural areas causing issues for farmers.  Uncared for animals also create health issues for both humans and other animals.
Intended Goal:  Regional Low Cost Spay / Neuter clinics - ultimately cheaper than overpopulation and shelter overload.  Provide regional facilities in all areas of Indiana.
The ABC Clinic in South Bend area and it could expand because of demand.  Perhaps some of these clinics could be assisted with funding from custom Indiana license plates.
http://www.spayneuterservices.org/our-programs/snap/
Spay / Neuter in Australia:  https://www.facebook.com/9NewsPerth/videos/1129358290409663/?utm_campaign=coschedule&utm_source=facebook_page&utm_medium=Dogs%20Naturally%20Magazine
Possible Birth Control for Pets:  http://www.goodnewsnetwork.org/new-birth-control-for-pets-could-make-spaying-neutering-obsolete

Require Chip at Time of S/N

​Problem:  People don’t think their pet needs a chip until the pet escapes.  If the pet is old enough, chipping is something that could be done at the time the pet is in surgery.  The chip number and the owner along with information the animal has been fixed could be entered into a State Registry.
Intended Goal:  Require chips and registering of chips at time of spay/neuter.  Returning an animal to the owner quickly reduces Shelter overload and euthanasia.
© 2009 – 2021 Neriman Publishing & Media Inc.